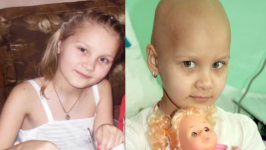 Varvara not for a second allowed the thought of failure to cope with the disease and she always believed she’d be the winner in the unequal battle with the severe disease. This little girl immediately realized that only unconditional faith in herself would help to conquer cancer cells.

Now Varya is an ordinary child who really wants to believe in her bright future.

Diagnosis: right adrenal neuroblastoma combined with damage of paraorthal lymphnodes and lymphnodes of vascular pedicle of the left kidney T3N1M0, Stage 3, after the comprehensive treatment - remission. Varya was diagnosed with it in November 2010, in cancer centre in Borovliany, Minsk district.

Initial treatment was carried out in Borovliany clinic - 6 chemotherapy blocks. Since there wasn’t a possibility to perform a surgery in Belarus, we went to an Israeli hospital Schneider, where the tumor was removed by 98%.  After Israel she underwent 4 more chemotherapy, beaming and 8 months of dry chemo (Roaccutane). There was a long-awaited remission in 2012!

The children with this diagnosis should have preventive assessments every six months for 5 years.  Thus we need to go back to Israel to fully examine and check Varya’s condition!!!

Neuroblastoma is the most poorly studied and insidious form of pediatric oncology. Very few survive. Our girl is the lucky one! But cancer is dangerous and may recur. We are all fighting for Varya’s life, this is our mutual victory! Now is very crucial moment - a 5-year remission threshold and half way to healing is passed.

His example proves: Cancer is curable.

Please, help us to make sure that the disease does not go back!!!

Many sencere thanks to everyone!!! 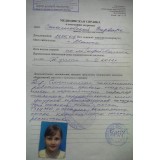