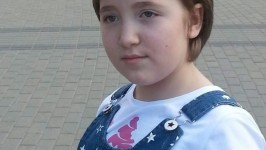 Diagnosis: The speech development disorder; dysarthria; mental retardation; Cerebral Palsy of average degree, Tonic-clonic form. Ira was born on 14.12.2007, at the 36 weeks of pregnancy term. The ultrasound at 35th week showed that the child had lack of oxygen. The doctors decided to induce labor, stimulated, and on the second day after stimulation our long-awaited girl was born! In the hospital everything was ok. But a month later we noticed that Ira was developing very poorly. For the next 2 months she didn’t show any singes of proper development, not even trying to hold her head up. The ultrasound of the head showed that Ira had hydrocephalic syndrome. So we started active treatment at home and in hospitals. At 6 months Ira began holding her head, 7 sounds appeared, she smiled at us, tried to pull the handles to sit down, as if everything was fixed. But at 8 months of age in the hospital Ira was given a large dose of diuretics and she got worse. Ira deteriorated to the level of a one month old child ... We went to the center "Mother and Child" in Minsk, and there Ira was literally put on her feet. Gradually she began to smile, then there appeared the first words. Since then our baby already had about 10 words: Mom, yum-yum, woof-woof (we had a dog) dad, uncle .... We were happy to hear every new word and continued to treat and strengthen her physically. At 1 year and 3 months we were on a regular course of treatment in a hospital, there Ira got ill with high fever, had some kind of infection (we do not know what it was). But having returned home, we noticed that she lost all her words, every day we were trying to remind them, but our girl was silent ... In 1 year 9 months she was diagnosed with CP. It was another terrible blow ... We knew that tears of sorrow wouldn’t not help. Again, we fought for the health of our girl. We were constantly undergoing treatments in different hospitals: injections, medications, physiotherapy, massage, exercise therapy, electrical treatments, laser, acupuncture, speech therapist, psychologist, music lessons, etc. ... But there was no response. She was on rehab courses in Minsk; St. Petersburg; Sanatorium "Belarus" in Druskininkai; 3"Dolphin" courses. The treatment gave results- Ira learned to walk, got stronger physically, began to understand more, but unfortunately, she is lagging behind in development and cannot speak.

Now Ira is 8 and a half years. This is the time when kids go to school, but health does not allow her to sit with the other children at the desk. We do not despair and look for possible ways of treatment. We did courses of treatment and rehabilitation in China, Foshan "hospital maternal and child", in 2014 for 4.5 months and in 2015 - 9 months. After the assessment in China Ira was diagnosed with atrophy of the frontal lobe brain petals that are responsible for speech and intellect. On 15 November 2015 in China's Urumqi, Ira had a surgery for implanting stem cells (in the head). Half a year passed since the surgery. Stem cells are well settled and began to function. As per advice of doctors, we are constantly loading Ira with daily sessions with a psychologist, speech therapist, motor skills, dancing ....

Those results we saw encouraged us and inspired to further action.

For Ira to live without constant assistance, perform a simple self-care skills, communicate with others, we need to take the next step. And this step  is stem cells (second implanting). We understand that without it we won’t be able to restore brain function, develop memory, attention, thought, speech.

We ask you, our dear friends, PLEASE HELP US !!! We really want to see our Ira smart and independent!!!!

The operation is scheduled for July 2016.The amount to be collected 12000$

We need to continue the treatment, but the family money is not enough for permanent treatment courses of our girl ... Please help us heal our baby! We won’t cope on our own ... Thank you to everyone who will respond and will not pass by our troubles!

Here are the banking details to help Ira: