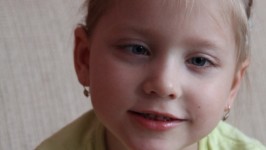 My name is Julia Nikolaevna Khristyuk. I am a mother of two children with disabilities – Polina and Maria. I will begin with the story of her eldest daughter Polina. Polina was born on 07.05.2009 prematurely - at 33 weeks with a weight of 2 kg. After a visit to the neurologist and several rehabilitation center "Tonus" she was diagnosed with: cerebral palsy, severe spastic hemiplegia in her upper limbs.

At that time it seemed that Polina was sentenced for life and for all of us who are around her and loves her. Polina has been in the rehabilitation center in Brest for children with intellectual disorders "Tonus" and in other centers of Belarus since she was 4 months old. However, for the full recovery it was not enough.

At the age of two years Polina does the first year of intensive neurophysiological rehabilitation at the International Clinic of Rehabilitation in Truskavts. Correction of the spine and a variety of procedures were carried out there: physio therapy, massage, light therapy, facial massage, reflexology, mobilizing exercises, Apitherapy, vibroekstenzor. After the first course Polina started turning around in different directions, crawling a little, muscle tone decreased, there appeared more words. Pauline was in that center four times. Today, Polina can crawl on their belly, sit on the floor, walk with support at both hands. She began to say simple words, simple sentences, but not always clear. Unfortunately, due to the strong spasticity in her upper limbs, Polina can’t not hold a spoon in her hand, and can’t eat independently, draw or write. My daughter is 7 years now. She is very smart and pretty. In March, May and December 2015 we went to Warsaw to the rehabilitation center "Olinek", where Polina was treated by method "Tomatis", as well as with a course of massage, exercise therapy. Two weeks ago we took Pauline to Tula for the tendon release operation. A month or two after the surgery it is necessary to continue active physio. Polina is scheduled for a rehabilitation course at the center of "Olinek" from August 8, 2016 and for a course of rehabilitation and social adaptation of the Institute of Conductive Education in Budapest on September 5, 2016. We have always paid for all rehabilitations and travel cost ourselves. And never complained. We know that there worse cases. In June 2014, we had twins, Alexander and Maria. Everyone was happy. However, it turned out that Masha got an intestine infection, and on the fifth day after birth Masha had her first operation and got a stoma in her belly. In intensive care in Brest Masha and I spent about one and a half months. Then in Minsk within three weeks she had complex operations on the intestine in the Republican surgery center. And then three long months in intensive care. But in spite of all the efforts, the problem is not solved. Masha was discharged from the hospital for a few months so that she could go home to meet the family and get prepared for the next operation. The first time Masha got home when she was almost 5 months. We were all very happy. Two months later, Masha had the last surgery and it was successful. We could not believe that it was over!!! But our joy was short-lived. We began to notice that Masha does not always respond to sounds. After all investigations Masha was diagnosed with hearing loss of the 4 degree on the right ear and the left ear - 2-3 degree. So far, none of the doctors can say for sure, why Masha lost her hearing. But all agree that the most likely numerous courses of antibiotics and led to the complications. We wanted to make an urgent operation on the establishment of a cochlear implant for her. Operation cost 26,500 Euro and 850 Euro Advance Diagnostics. The operation was scheduled for September 2015. And we got help !!! The necessary amount was collected in three months. Masha had surgery in September. We still have a long way to go with Masha, because the intensive care after surgery took so long. She will turn 2 in a few weeks time!!

And now back to our older daughter to Pauline. After the operation, as I wrote above, we have planned several exchange rate rehabilitation. In "Olinek" they provide the therapy in a suit "Adeli" and hand therapy. The second course is scheduled for September, we had planned to go to the Institute of conductive Pete Pedagogy in Budapest, where children try to learn to adapt to the social environment.

Unfortunately, rehabilitation and accommodation costs a lot of money. All our money spent on maintenance of the auditory processor and hearing aid youngest daughter. According to the latest rates the rehab in Olinek center is about $ 1,700 and $ 500 for accommodation. And in the course of the rehab institute Pete is 1200 Euro and 1100 Euro for accommodation. The returned flight to Budapest is about 15 million rubles. Please help raise funds for two rehabilitation center "Olinek" and the Pete Institute for our eldest little daughter Polina. Course in Warsaw is around US $ 2,200 and a course in Budapest is about 3000 Euro.

With great respect and hope for help, Julia Khristyuk

Accounts opened in the name of Julia Khristyuk 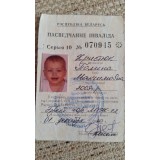