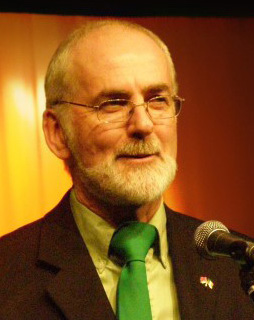 The charity fund DOBRA TUT is the child of the Irish Charity Group BURREN CHERNOBYL PROJECT . This Irish charity has been working in Belarus since 1994 in response to the Chernobyl Tragedy.

The local charity fund DOBRA TUT was registered in Minsk on the 17th of January 2008 to complement the work of BURREN CHERNOBYL PROJECT and to facilitate its work and development in Belarus and also to involve new donators and volunteers.

Since then it has carried out many projects mostly in internats and orphanages for special needs children. You can read about these projects on our website.

The members of the Management and the Controlling Committee of DOBRA TUT are well known social figures having positions in social and business spheres.

William O’Meara (on the photo) – is the director and the establisher of the fund. He is a former school teacher from Ireland. Since 1994 he has been one of the members of the Burren Chernobyl Project Committee. Since then he has spent most of his time in Belarus carrying out charity projects. Since 2008 he is the director of the Charity Fund Dobra Tut.

He has written a book about his life and work in Belarus called “Fallout” and a fiction book called “Nuclear Families”.