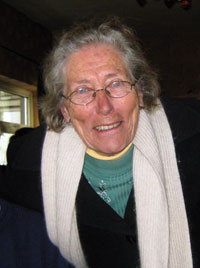 I am lucky in life. I can surely say that because I had a chance to meet an angel. Yes-yes, don’t be so sarcastic – you don’t know whom I’m talking about.

Teresa Flynn – this name is well known to the people of Cherven, Belarus and surely to the people of Co. Clare, Ireland. This 80-year-old woman is a true legend. And as it was already said she is a legend.
One can talk and write about her endlessly but usually you don’t know where to start. But let’s start with the main thing.

This tall, slim but very strong lady will surprise you with her spirit, open mind, cheerfulness and … her constant “diet” – coffee and cigarettes.

Sometimes it seems that she is younger and more “advanced” than young people. And there are so many unusual, astonishing stories that happened to this wonderful Teresa. She’s got handful of such stories: it's either her helping Hollywood stars to get out of the dirt of Irish roads washed away by rain right beside her house, or giving life to children in different countries – Teresa is a qualified midwife, or sharing all her love and her warm heart with the special needs children in orphanages in Belarus.

Teresa is the name you will always hear when you get into Cherven children orphanage. There is not a single person that doesn’t know her, that doesn’t love her. Every time when I go there I hear questions about Teresa.

I have never heard Teresa to say bad things about people. She justifies everyone. If in her house, that she has never locked when she was away, something was missing or stolen she would say: «Apparently they need it more than me».

Unfortunately she doesn’t visit Belarus for 2 years now, her age is not appropriate. Although this is not the real reason. The real reason is that her sense of life during recent years – little boy Sergei Ulianchik – a child with severe physical and intellectual difficulties is gone for several year now. He died. Their story is the most touching that I have ever heard. It’s a lot to tell how they met each other and how they grew together. I will say only this - at that moment Teresa approaching her most respectable age has made a real deed – she gave Sergei several years of real family, real love, best care. She gave him a chance for normal life, the one that ordinary kids have. She, a person from a foreign country, an elderly woman, forgot about herself, her age and gave herself up to a child, completely. He lived with her in Ireland and that was the best time for both of them. Then the child was called up back to Belarus she didn’t hesitate a moment – she went with him. How can you abandon a child? How is he going to be there alone, in the orphanage? She was pretty determined. And she stayed with him till the very end. «My little angel» - that’s how she called him. Knowing so many stories when mothers leave their own children in the orphanages, all alone, you understand that such people as Teresa are real angels. For some mothers their disabled children are a burden, a nightmare that they want to cross out of their lives and never remember it. They abandon their kids in different conditions – some of the children suffering from severe disabilities and require full care – some of the children being in better health state. But the result is the same these mothers do not need their children the families do not care about them. That’s why I can surely name Teresa a true MOTHER for all she did to Sergei.

She became an example for her own people in Ireland, and many hearing her story were inspired and became and still become volunteers, they get involved with our organization and come out to Belarus to help in the orphanages. And I’d like her to become an example for our people as well. Because I believe that angels dwell on earth, they live inside us. We just need to see it.