You are my friend forever 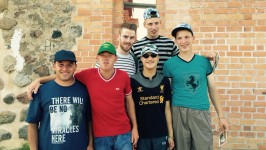 Another life changing experience in Gorodishche with thanks to the Burren Chernobyl project.

John Mc Manus shares his story about his trip to Gorodische this year:

"This year I returned to Gorodishche orphanage for the second time. I must admit that I was slightly apprehensive to return this year having had such an amazing experience last year, I was unsure if this year could compare- I couldn’t have been more wrong. This years’ experience completely surpassed all of my expectations.  Myself and the other volunteers were overjoyed to see the children being stimulated and engaged with on a daily biases, to see them outside with the sun on their faces and being treated with care and kindness by some fresh faces in the orphanage. It was also fantastic to see our donations and resources from last year being put to great use.

This year we did a wide variety of things with the children which they, I and the rest of the volunteers truly enjoyed. On the first day of our trip, we visited each of the groups to reunite and reacquaint ourselves with the children. It is such an amazing feeling to see, hug, talk to, play with and spend time with old friends in Gorodishche and just as amazing to see the faces of new children and get to know them. One of my personal highlights of the trip was walking into group 5 and having beautiful Vika (who was previously in group 3) recognise me, run into my arms and squeeze me half to death with one of her loving hugs.

Group 3 is always a difficult one to visit, especially when some of the smiling faces from the previous year are no longer there. Tears were shed and memories recalled of those children before moving on to spending time with the ones that remained. Although they can be one of the saddest groups to visit, I find that group 3 and group 4 are the ones upon which one can have huge impact, even in the space of a week. We fed the children, gave them massages, brought them around the grounds in their wheelchairs and allowed the sun to shine down on their faces and the fresh air to fill their lungs. We also fed them yoghurts, played with them and gave them the one on one attention which they love and crave so much.

We also spent a lot of quality time with group 1. This group, which is primarily made up of young adults, loved being brought down to the gym where we played sports, danced and spent quality time with them. They also love to have their pictures taken and to take pictures of each other.  They were also fed nutritious yoghurts and enough sweets to last them a life time.

Every evening at seven we would take the older boys from group two outside to play some football. Although the five Irish volunteers never stood a chance against the thirteen young men who we faced, it was incredible fun for all involved. Once we had suffered a mortifying defeat (every evening), we would feed the boys sandwiches and sweets before going up to the other boys from group two who did not like to play football and give them the same and spend some time with them. On the last night of our trip, we cooked up all the food that we had left in the house, bought bottles of coke and sweets and fed all the group 2 boys a feast fit for a king.

The weather during this week was so amazing that we seized every opportunity that we could to take the children outside to let them enjoy the sun. We took the older girls from group 7 for a walk around the local village and took them for ice creams. We also walked to the graveyard where children of the orphanage are buried to pay our respects- a very sad experience but great to see that headstones had been bought with donations that we made last year so that the children’s graves are marked and they are remembered. We also made use of the fantastic weather by bringing the children on a day trip to a nearby town where we were given a tour, visited many sights and had a picnic in the forest. One of the boys said after the picnic that he had never eaten such wonderful food in all of his life which was  truly heart-warming to hear.

My personal favourite experience of the trip was walking down to a nearby lake with children from groups six and seven.  On  this day I was reunited with my best friend in Gorodishche- Andrei from group six. Such a pleasure to walk to the lake with him and help him learn English and try my very best (and fail) to learn Russian. Such an intelligent, kind, warm hearted, funny and inspiring boy who breaks my heart as he has so much potential and I know he would flourish and achieve in a mainstream school in Ireland. My heart broke even more when he asked if he could come back to Ireland with me and I had to say no (but I am hoping that this answer can change soon). We had a picnic with the children down by the lake but on this 37 degree day it was not long before myself (the biggest child of them all) and my partner in crime Andrei were in the lake splashing everyone. Soon everyone was soaking wet, laughing and having a great time.

The week doesn’t take long to slip by and before long you are left with just a few short hours to say goodbye to the most inspiring, resilient, loving, caring and amazing people you have ever met and ever will meet.  There is a lump in your throat and tears in your eyes from the moment you say your first goodbye, right up until you say your very last. Although saying goodbye to the children of Gorodishche is possibly the most difficult thing I have ever had to do, I would not trade my experience, my memories and the friends I have made there for the world.

To those of you who sponsored myself and my fellow volunteers- your generous donations have bought a veranda for group three (who are immobile and bedbound) so that they may get out and feel the sun on their faces and fresh air in their lungs as opposed to lying indoors all day. This veranda will be built within the next month. One of the ladies working in the orphanage commented that she was so happy that the needs of these children were finally being met.  We also put money towards building a drying room so that the children’s clothes and blankets can be washed and dried more easily during the winter and they can be changed more often. We bought tracksuits with elasticated waistbands which will encourage independent toileting and changing as buttons will not be an issue. We bought nutritious yogurts for the children, picnics, funded 2 day trips and bought presents such as watches, pencils and copies, teddies, etc. Thank you all for your donations.

I would like to extend my sincere gratitude to the Burren Chernobyl Project for once again facilitating such a life changing experience, I would like to thank our driver Tamara for getting us from A to B, I would like to thank our amazing, inspiring interrupter Irina who has such a loving, caring nature towards each child- I am in complete awe of her, and finally, I would like to thank the children of Gorodishche orphanage for being such resilient, brave, kind, caring, loving and amazing children. I have such respect for each and every one of you and cannot wait until next year when I can relive this experience with you all over again. But until then:

"ты мой друг навсегда"- “You are my friend forever” 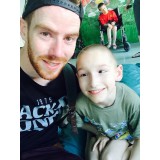 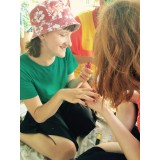 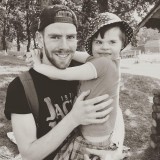 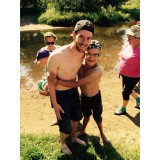 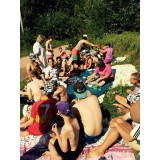 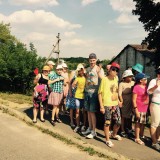