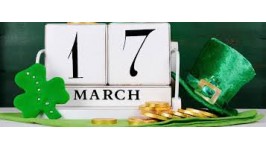 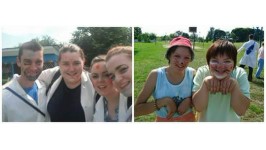 Another busy volunteer season is about to start but we would like to recall a few lovely moments from another season. Read more
Read more 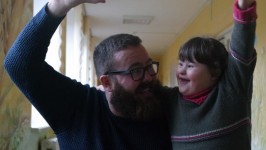 Winter is a relatively quiet time, when you can look through photographs, memories, moments, impressions. Read more 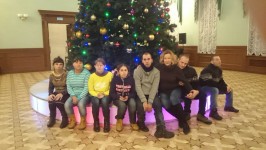 What would you do, what would you feel if you met your dream in real life? Of course, happiness! After all, the desire to be happy is perhaps most important and necessary for every person. Читать далее 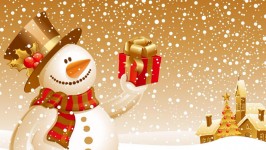 Our lovely friends, volunteers of Burren Chernobyl Project – you may be far away, but you’re still very close and like a family now! Read more 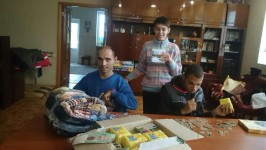 These festive days are full of joy of receiving and making presents. Especially, when those presents are unexpected, but so necessary. And sometimes they arrive from unexpected places. Читать далее

Today is the International Day of People with special needs. It's very hard to say something on such a day. It's hard to pick up words. Continue reading 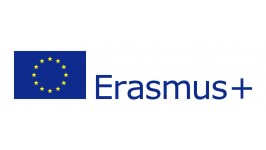 News on another humanitarian aid 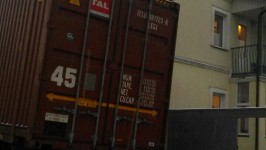 A few days ago another humanitarian aid truck from Burren Chernobyl Project reached Dobra tut Fund successfully. We are waiting for the documents to be cleared and then will start delivering aid to the institutions and organization that need support most. As always the details are to be found in our REPORT section.

We thank all those caring people from Ireland who have donated things for our orphanages and all those who helped with loading and paperwork! 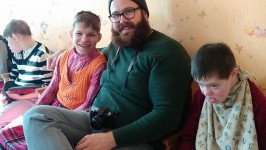 This week as well as the last one were busy in both children's orphanages - Gorodische and Cherven. The kids were welcoming old friends, having a lot of fun altogether. Movies, games, tea parties, and surely lots of love filled in these cold October days. And while we are waiting for the stories from our volunteers, here are a few happy faces from Cherven (on the photo - Dean Ladrigan and Cherven kids). Looking forward to hearing all about this lovely time! And thank you very much for your support!!!

Report and not only 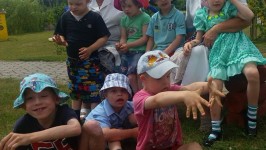 Firstly, the Fund provided humanitarian aid (brought from Irish organizations Burren Chernobyl Project and Chernobyl Children’s Trust) to a number of organizations in Belarus. You can read all about it in the REPORT section (it is regularly updated). 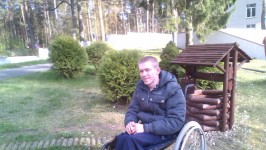 The wonderful lad Alexandr Dankevich needs your support. Sasha suffers from cerebral palsy, but nevertheless, he does not give up. He finished high school (11 years) and tries to lead an active life, but for this he needs an electric chair. We ask you to help him buy on at cost of $ 3,000. For Sasha this amount is unbelievable hard to raise, but we believe that caring people will be able to support him. We thank all those who respond to this post and help Sasha to raise funds.

Here are his banking details:

Payment purpose: for Dankevich Alexander to purchase an electric chair

Hearing aids and rehab for Zakhar 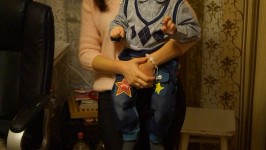 Tatiana – Mother of Zakhar Lukyanchikova has applied to us looking for support. She is asking all caring people to help in raising funds for the rehabilitation of her son Zakhar in the clinic of Professor Kozijavkin in Truskavets. The amount, covering also account transport costs, makes 5200 dollars. Zakhar also needs hearing aids that cost 2,182.82 Belarusian rubles. Since the family had spent all their resources for treatment in clinics and centers in Grodno, Brest, they are asking for people’s support now.

We ask everyone, who can contribute to the treatment of the child, to support this family! Many thanks in advance!!!

The management of JSC "Belinvestbank" in Grodno region

Payment purpose: To be admitted to the charity accounts opened in the name of Tatiana Lukyanchikova for treatment and rehabilitation of her son Lukyanchikov Zakhar Mikhailovich.

One man is THE MAN 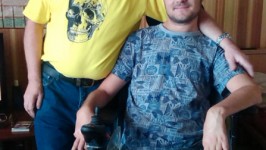 Last week was pretty busy for Cherven children’s orphanage and the community. Our most dedicated volunteer Sean Hegarty from Ireland did a fantastic job on fixing the wheelchairs both in the orphanage and in the families we look after. Sean also brought 3 specially made wheelchairs for kinds. A few days of traveling to the children in the community and long days in Cherven brought fantastic results even though this year Sean came on his own.

It is always lovely to have Sean back and we look forward to seeing him again soon and hopefully for longer! Thanks a million, Sean!

As the summer went on 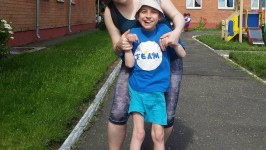 The time goes on, things change, but something remains unchanged, like love of our volunteers, who keep traveling to Belarusian institutions no matter what. One of them is a lovely young girl Ruth Byrne from Clare. We always enjoy listening to her stories. This one is from this year’s trip:

My three weeks in Belarus absolutely flew by this summer, faster than time should be allowed to! They were fun filled, busy, brilliant weeks. Packed with activities, trips and love. I crossed paths with new and old volunteers alike. It was great to see so much fresh blood this year. The children were spoiled rotten and loved every second of it.

With the highs came the lows, and I felt many challenges were thrown at me this year, more so than other years. Firstly, I was full of emotion and apprehension before travelling as I knew so many of the little faces I love wouldn’t be there. It was a very sad year in both orphanages. The impact of which hit strongest in Cherven, particularly unit 5 as it was my first stop. Pasha’s absence was over whelming. Unit 1 was also difficult as Ruslan and Sergei’s room was particularly empty with the two of them gone. Groups 3 and 4 in Goradische were also very difficult as too many were missing, Artiom, Maxim, Igor, Vika, Liza. But, as any of you who have travelled before will know, there are so many other wonderful children there needing love/ hanging out of you that you don’t get much time to dwell on those emotions. I visited the graveyard in Goradische to pay my respects, and remember them. I will always remember these angels. <3

The other main challenge was in my final week. The children in Goradische were unwell with a tummy bug. This meant (at one point) that all the groups were closed and we didn’t have any access to the children. While we understood this was the right call as we didn’t want the bug to spread, it didn’t take from the frustration. We felt so helpless being so close yet of no use. Knowing they knew we were there and not coming to visit them was so difficult. We were allowed access to one, and then two groups… groups 1 and 6 did very well out of the situation as they got two full days of the Irish to themselves!! J

As always though, the happy moments are always in plentiful supply.

My time in Cherven was short but jam-packed. I met two new volunteers while there, Aoife and Rachel Kenna. The girls were there for a month in total and were doing fantastic work with the children and young people. They paid a lot of attention to unit 3 who are often over looked by most groups so this was lovely to see. We spent a lovely afternoon colouring with the girls in 3. We had music and goodies too of course! We spent a lot of time outside with the older ones. Lots of sports and dancing. There were Frisbees flying everywhere and rackets and balls too. They were a particularly hot couple of days and some of the units were hard at work in the garden and preparing a new court yard. The disco corner was as busy as ever. The dancing did not stop. They were showing me their new moves and new tunes. Igor was on hand to take lots of photos, and Sergei to mind my bag! Everyone was in great form, delighted to have company. It had been a long while since Cherven had had Irish people visit so it was nice to treat them all. I spent a lot of time with unit 5, every day if not twice a day I would go to unit 5 and bring them for walks. Those that could, I would take them out of the chair and work their muscles, Vlad never wanted to stop! J The girls did fantastic work in the sensory room too.

I made my way to Goradische, and found half of Ireland there! Having so many volunteers made the ratio of Irish: Belarussian a lot healthier! It was amazing to go into a group and have so many children seen to at once. The heat continued that week so it was the perfect opportunity for some water sports, who knew towels and water balloons could be so much fun! We had two trips to Baranovichi, where we took the young people to a petting zoo, fairground, cinema, restaurant and for ice-cream. Smiles and full bellies all ‘round. While the weather was good we tried to get everyone out as much as possible where we went for walks, played football, and celebrated St. Ivan’s Day. When the weather wasn’t in our favour we took them to the hall for games. We had sensory play with groups 3 and 4. One of the highlights was the success of a day of water play with group 4. The squeals and giggles lasted all afternoon, all of them wanted a go, even Anya came racing in to the classroom! We baked with the Independents, and spent Independence Day with them in the local park where they were taking part in the celebrations and selling their crafts and baked goods. It was so special to see them interacting with the public and selling their pieces with pride.

Over all it was a roller coaster of emotions, as per usual! But it was great. We made the most of the time and resources we had. I’d like to thank everybody who supported me with donations of toys, clothes and money. Know your kindness went to medicine, trips, goodies and general running cost of the orphanages. Thank you all again! A big thank you to all at Burren Chernobyl Project and Dobra Tut who work so hard year on year to allow these trips to happen. Thank you so much, Spasiba Bolshoi!! 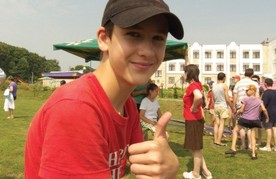 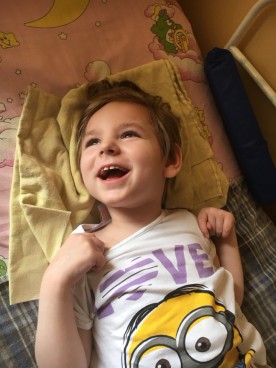 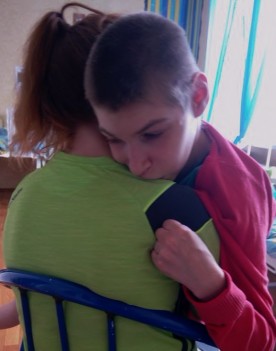 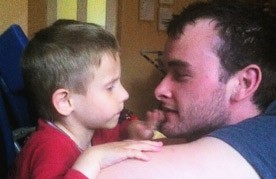 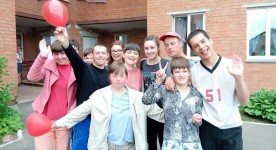 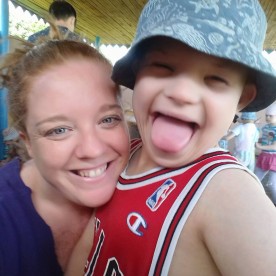 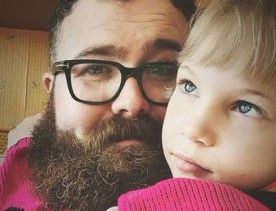 Charity Fund "Dobra tut" is the organization whose main priority is to support financially and materially some of the orphanages in Belarus and also involve volunteers into work with the children and adults.

You can support our projects by transferring money to our account, or become a volunteer and help the children and adults directly. On our website we provide you with the full report on the work of our Fund.